AnnaLynne McCord’s Valentine’s Day Plans: ‘Robert Pattinson and I Are Going Out!’ 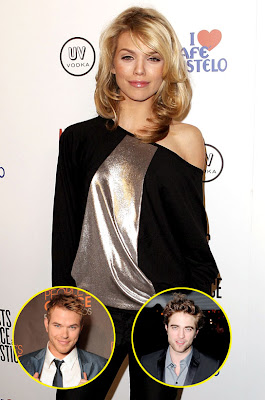 OK, we know you’re joking AnnaLynne – but we do think it’s funny that you mentioned your on-again/off-again boyfriend Kellan Lutz’s Twilight co-star and not Kellan himself!

AnnaLynne McCord and her sometime-honey Kellan Lutz, 24, may be off-again for the moment after their hot hookup in Miami over New Years. The 90210 starlet jokingly told us that she has a different Twilight co-star on the brain where Valentine’s Day is concerned.

“Oh yes [I have a Twilight date],” the 22-year-old laughed to HollywoodLife.com exclusively at the Artists for Peace and Justice fundraiser in Santa Monica, Calif. Jan. 28. “Rob Pattinson and I are going out.”

GASP! But AnnaLynne proceeded to deflate our excitement by giggling, “And I’m also pregnant – actually eight months pregnant – but you can’t even tell. Pilates is a genius!”

She sighed, “No, unfortunately [we’re not going out] but if I see him I would definitely give him a big Valentine’s kiss…right on the CHEEK!”

Well played, my friend. You wouldn’t want Kellan to get jealous and beat up his on-screen brother, would you?
hollywoodlife
Posted by PATTINSON LADIES™ at 12:13 AM