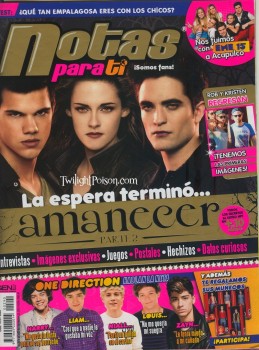 To read the rest of the interview & check all the scans click here
What do you like most about Edward?
He’s very passionate and honest. I’d love to love like that; Bella is everything to him. I have not falenl as hard as Edward does.

What do you not like about him?
He acts without thinking, and I’m not going to deny that I tend to do that too. I’ll miss being a vampire, because I do relate to Edward, and I know many people don’t believe it but I do like the character.

Who did you get along with the most during filming? With whom did you feel like you had the most chemistry?
We all got along famously, nobody isolated, everybody hung out together. I don’t think anyone hates me.

What’s your favorite Twilight movie?
I love BD1, the wedding was spectacular. Seeing Kristen dressed like a bride was like being in a dream.

Also, a mention from Mackenzie
How was your relationship with Rob, Kristen and Taylor?
They’re great people, they’re playful and fun. Rob was like a dad, taking care of me on set. Taylor made me laugh a lot and we played football on set. But who I really had a good time with was with Kristen. One time we got in trouble with our director Bill because we were chatting and we didn’t realize that people were waiting for us to shoot a scene. They were all sweet but they swear a lot.
via
Posted by PATTINSON LADIES™ at 11:38 PM