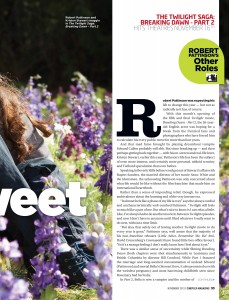 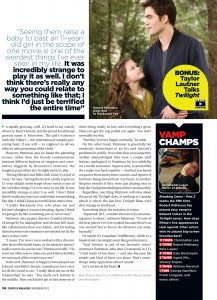 Transcript thnks to RPLife
Robert Pattinson was expecting his life to change this year — but not as radically as it has, of course. With this month’s opening of the fifth and final Twilight movie, Breaking Dawn - Part 2, the 26-year old English actor was hoping for a break from the frenzied fans and photographers who have forced him to calculate his every public move for more than four years. And that mad fame brought by playing dreamboat vampire Edward Cullen probably will ebb. But since breaking up — and then perhaps getting back together — with his on-screen and real-life lover, Kristen Stewart, earlier this year, Pattinson’s life has been the subject of even more intense, and certainly more personal, tabloid scrutiny and Twihard speculation than ever before. Speaking in Beverly Hills before word got out of Stewart’s affair with Rupert Sanders, the married director of her movie Snow White and the Huntsman, the unknowing Pattinson was only concerned about what life would be like without the film franchise that made him an international heartthrob. Rather than a sense of impending relief, though, he expressed ambivalence about the looming end of the very intense era.

“It almost feels like a phase of my life is over,” says the always cordial and uncharacteristically well-combed Pattinson. “Twilight still feels so much like a part of me. But what’s nice to know is I can relax a little. Like, I’ve always had to do another movie in between Twilight episodes, and now I don’t have to anymore until I find whatever I really want to do next, without a time limit.
*More under the cut*


“But also, that safety net of having another Twilight movie to do every year is gone,” Pattinson says, well aware that the majority of his non-franchise releases (Little Ashes, Remember Me, Bel Ami, David Cronenberg’s Cosmopolis) have found little box-office favour).

“So it’s a strange feeling; I don’t really know how I feel about it yet.”

There was a similar sense of uncertainty while filming Breaking Dawn (both chapters were shot simultaneously in Louisiana and British Columbia by director Bill Condon). While Part featured the marriage and long-awaited consummation of undead Edward (Pattinson) and mortal Bella’s (Stewart) love, it also presented us with the weirdest pregnancy and most harrowing childbirth seen since Rosemary had her baby.

In Part 2, Bella is now a vampire and the mother of a rapidly growing…well, it’s hard to say exactly what it is. But it’s female, and the proud, bewildered parents name it Renesmee. The girl’s existence leads the Volturi — the international vampire governing body, if you will — to engineer an all-out effort to take possession of the child.

However, Pattinson says he found the parenting scenes, rather than the bloody confrontations between different factions of vampires and werewolves triggered by Renesmee’s existence, the toughest parts of the last Twilight movie to play.

“Seeing Edward and Bella with a kid, it’s kind of crazy,” he says. “Seeing them raise a baby to past an 11-year-old girl in the scope of one movie is one of the weirdest things I’ve ever seen in my life. It was incredibly strange to play it as well. I don’t think there’s really any way you could relate to something like that; I think I’d just be terrified the entire time.

“Luckily Mackenzie Foy, who plays me and Kristen’s daughter, was just amazing. Again, I think it’s going to be like something you’ve never seen.”

Pattinson also praises director Condon (Kinsey, Dreamgirls) for making him and Stewart feel more like collaborators than ever before, and for letting them know he was sometimes as weirded out by the story as they were.

“I mean, I’ve never even worked with a director who shared his failed ideas, or the ideas he doesn’t really want to do, just in case,” Pattinson recalls. “He went out of his way to make me and Kristen feel like we were part of the creative process.”

In the end, Pattinson is happy to have played out Edward and Bella’s bizarre, tumultuous love story for all the world to see. “I really liked the arc of the relationship,” he says. “You reach rock bottom in the middle. Then you kind of get to this moment of them being totally in love and everything’s great. Then you get the rug pulled out again. You don’t normally see that.

On the other hand, Pattinson is gracefully but resolutely disinclined to air his and Stewart’s problems in public. Over their four years together, neither acknowledged they were a couple until Stewart apologized to Pattinson for her infidelity via a media statement. At press time, it seemed like the couple was back together — but that was based on quotes from anonymous sources and reports of furniture being moved from one home to another. Skeptics wonder if they were just playing nice to help the Twilight marketing machine run smoothly.

Regardless, one thing Pattinson will miss about the good old Twilight days, is working in Canada, which is where the last four Twilight films were shot in large or small part.

Something about the isolation, it seems.

“Squamish [B.C., outside Vancouver] is an amazing place to shoot,” enthuses Pattinson. “It’s one of the best places I’ve ever worked because there’s no one around! You’re free to do whatever you want, basically.”

Or maybe it’s Canadians’ indifference, which to a hassled star can simply seem like good manners.

“And Toronto is one of my favourite cities,” continues Pattinson, who shot Cosmopolis in T.O. “I had loads of fun there — and also because the people just kind of leave you alone. That’s something I really appreciate about Canada.”

Let’s not break his heart.
Download the pdf HERE!
via|via|via

Posted by PATTINSON LADIES™ at 4:05 AM